In a maternity ward somewhere, a Father-to-be paces the bare corridors, twiddling his thumbs. The ante-natal classes didn't prepare me for this he muses to himself. This birth is much more complicated than that of his previous children. It is late into the night of the 31st August and this primary mathematics teacher knows his statistics. Either side of midnight changes everything.....

The 2016 pupil data for Key Stage 2 is in the table above.  The percentage of children reaching the expected standard born in September 75. In August only 65% made this standard. 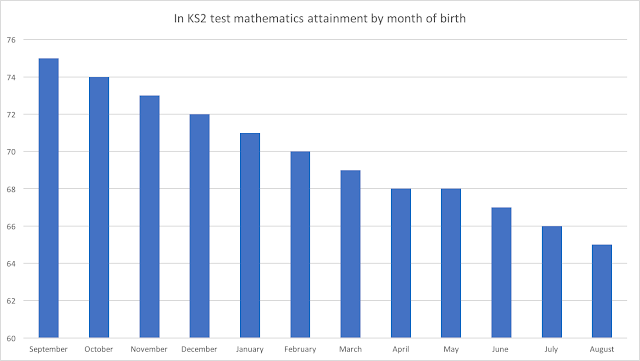 My next stop took me to the data for the KS1 assessments. To make a point this y-axis starts at 0. 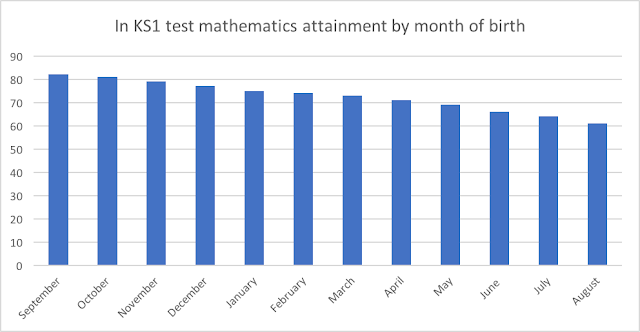 The percentage of children reaching the expected standard drops from 82% (September birth) to 61% (August birth).  When we look at pupils known to be eligible for free school meals, 58% of these pupils made the expected standard. Of the other children, 75% of children made expected in maths. The September to August gap was 22% while the disadvantaged gap was 17%. Let's consider the profile and financial expenditure on disadvantaged children. Is there similar emphasis on summer born children? Most teachers don't know this effect exists.

I wanted to know whether the 'increased expectations' of the National Curriculum and the associated assessments were magnifying this issue.  I can't find any data of old SATS to compare against. I'd be grateful for anyone to share this if they have.

The eagled-eye of you will have spotted that this doesn't just apply to maths but the trends are evident against other curriculum subjects. I've focused this blog on mathematics because of the sea change this country is undergoing in terms of mathematics educations. The Shanghai visits and the shiny new textbooks are unlikely to reverse this trend. Furthermore, the evidence above disputes one of the definitions of mastery - the definition that everyone can learn maths to a high degree -because the data clearly states that birth month will affect your chances of making the standard. We could argue the that arbitrarily high expectations of the curriculum puts a moving developmental ceiling on some learners who have had less time to develop. It is difficult to argue this without evidence from the previous assessment regime. Perhaps, we need a scaled score dependant upon DOB. Something much more akin to standardised tests

What I do know is, in 3 weeks time some children will leave primary school labelled as failures. That itself is heartbreaking. The likelihood of that is much higher if you they are summer born. No-one is talking about that....yet.

Bar modelling in early maths - how is it beneficial?

Bar modelling is often credited as a central pillar in the successful mathematics curriculum and pedagogy of Singapore and other East Asian...